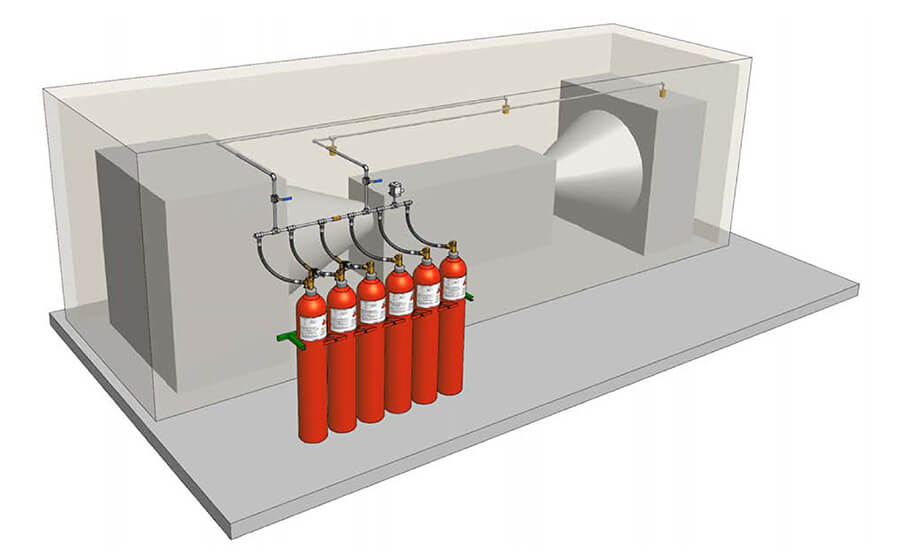 Manually dischaged CO2 systems a commonly used for the protection of engine rooms in marine applications. The volume of such rooms can be large and are less expensive to protect, when compared to the use of other gaseous extinguishing agents.

The agent leaves no residue when discharged and personnel are always trained in the use of such a system. 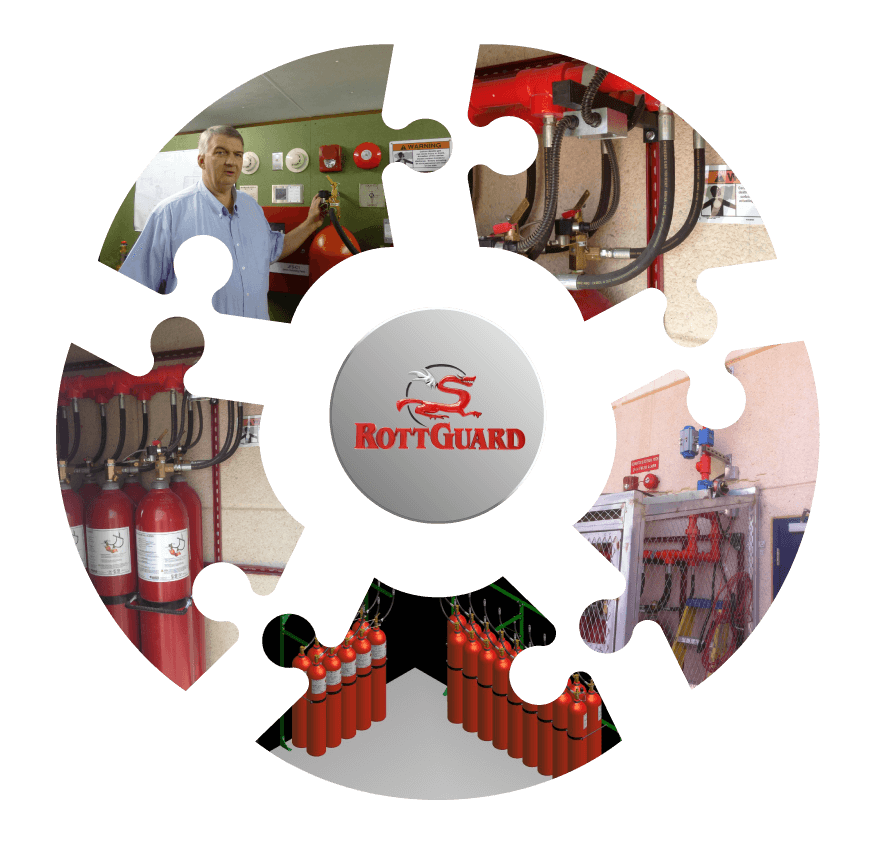 CO2 is faster in knocking down a fire, when compared to other agents and can be used for the protection of areas that are not necessairily totally enclosed. 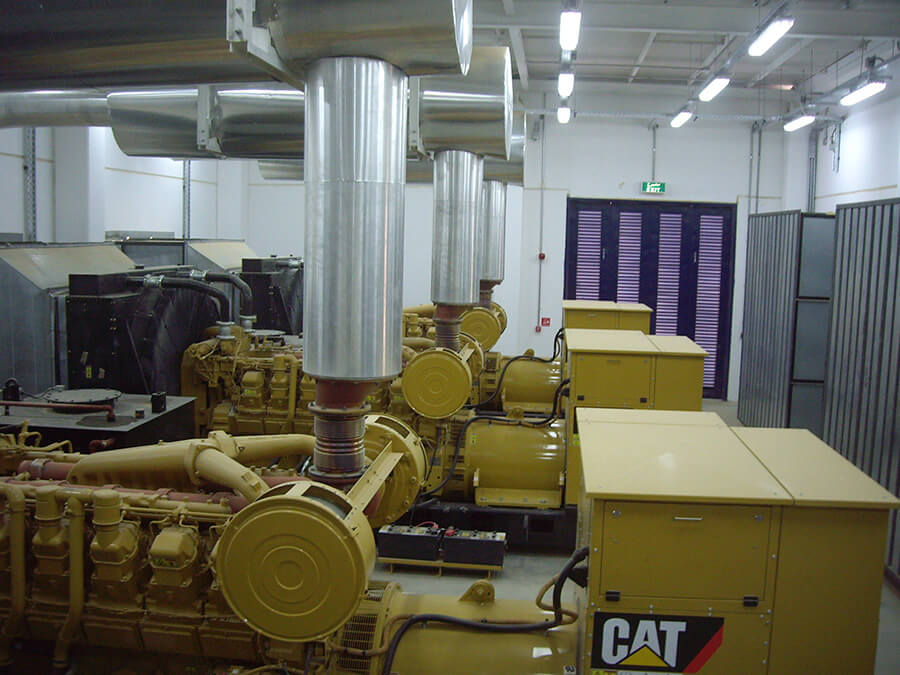 This images shows three of the four generators in one of Almarai's factories. There a four large louvre vents on the left hand wall, over which automatic fire curtains were fitted. The closed fire curtains would assist in maintainiing the rooms air integrity, but it was not possible to close off the openings around the cooling fans attached to the generator on the opposite wall. It was for this reason that CO2 was chosen as the extinguishing agent in preference to FM200. 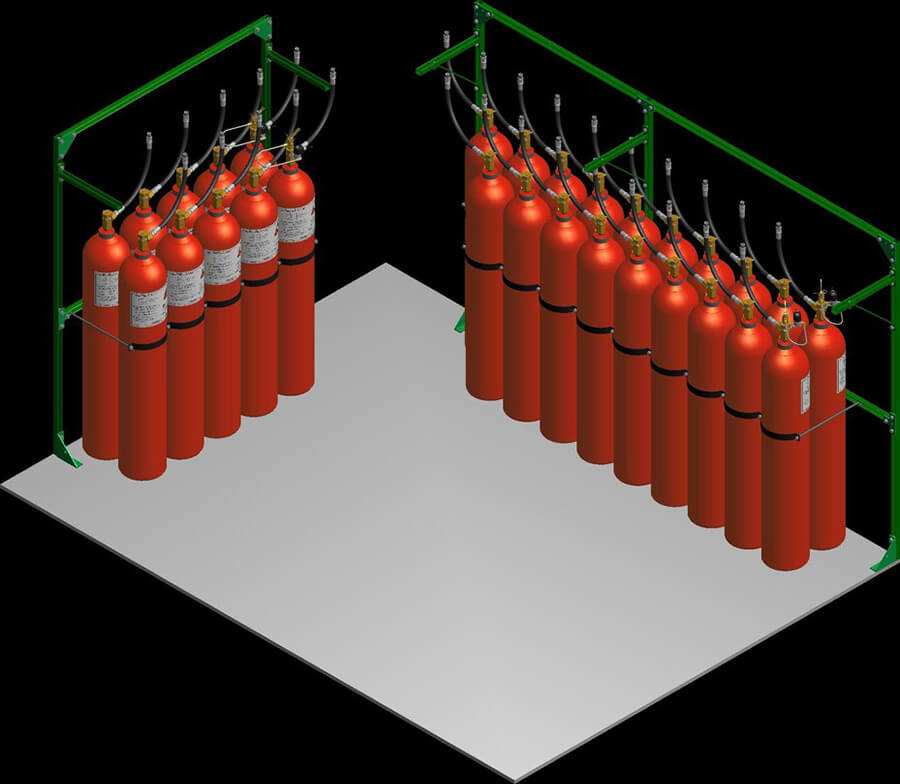 This drawing shows the main CO2 cylinders with some reserves located outside the generator room. The design of the system is such that it would reduce the oxygen in the room to a level that would be incapable of supporting life within fifty seconds. 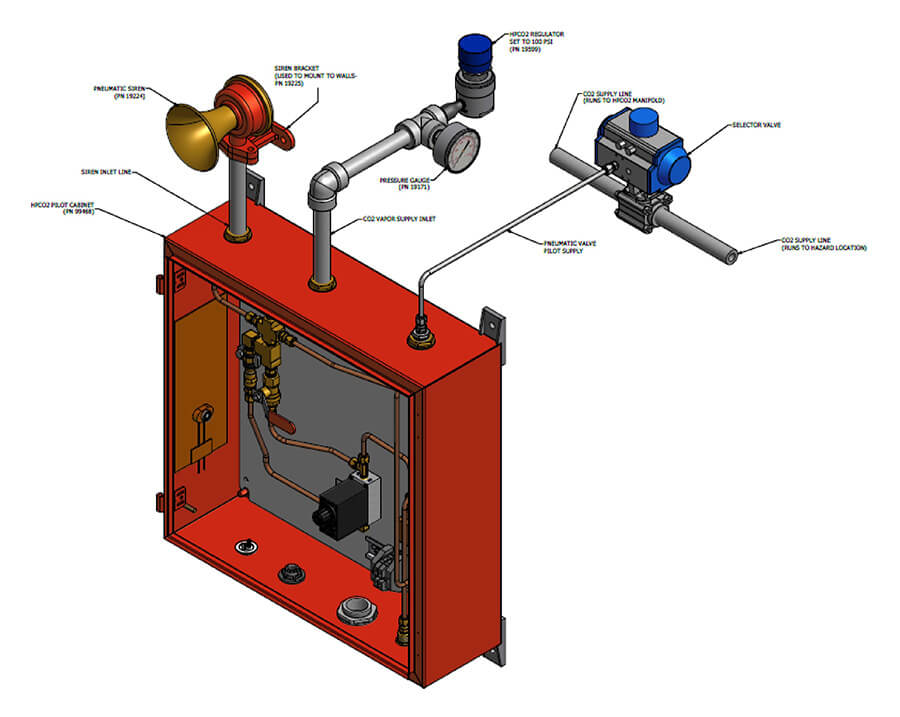 An added safety feature of this system is the use of a pneumatic pilot control panel. At the time of a discharge, CO2 from the manifold is diverted through a low pressure regulator. This low pressure CO2 passes through a pneumatic timer, which in turn controls a pneumatic valve. This arrangement ensures that even if the system is activated manually, that personnel within the room, will still have an opportunity to vacate it; aided by a pneumatic horn and an oderizer which gives the CO2 a scent. 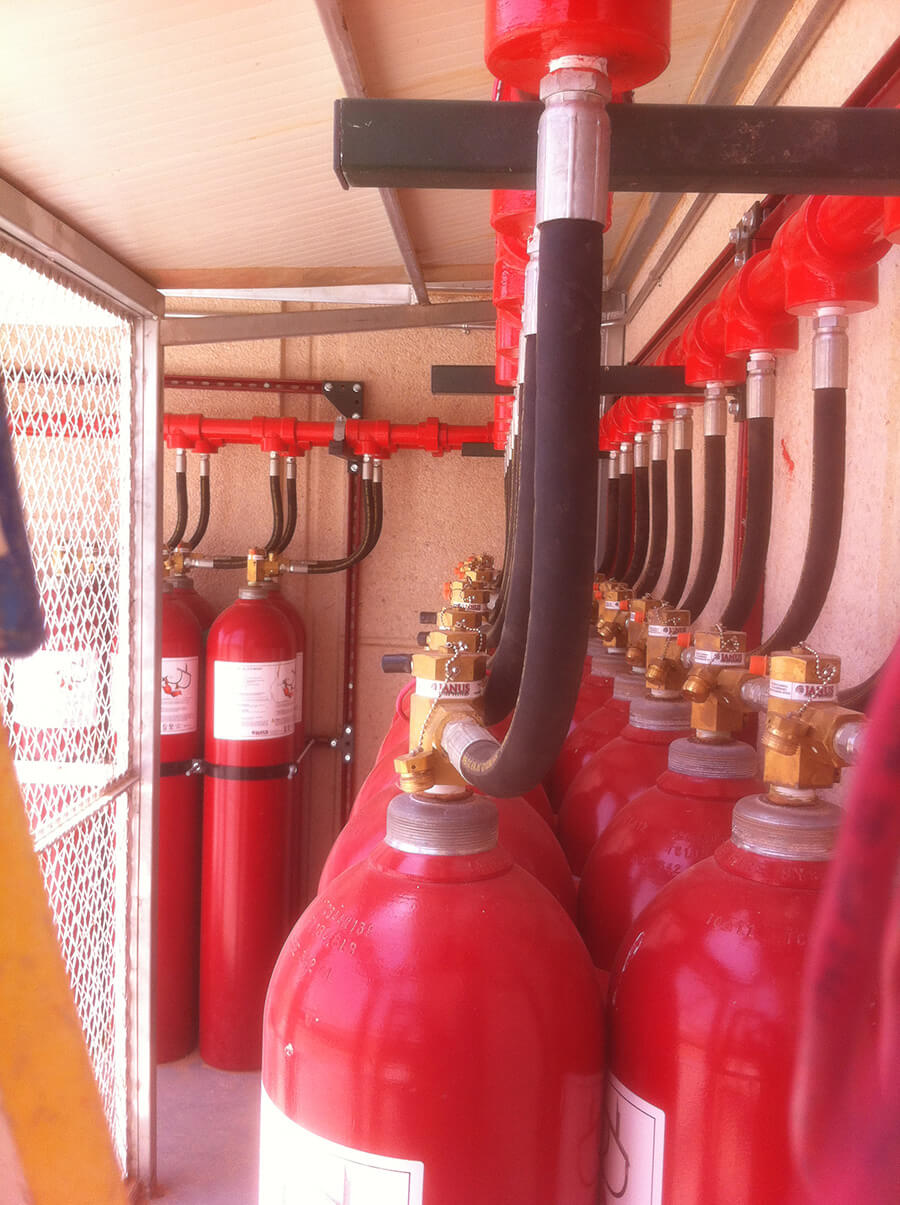 This image shows some of the cylinders with their high pressure hoses connected to a manifold. 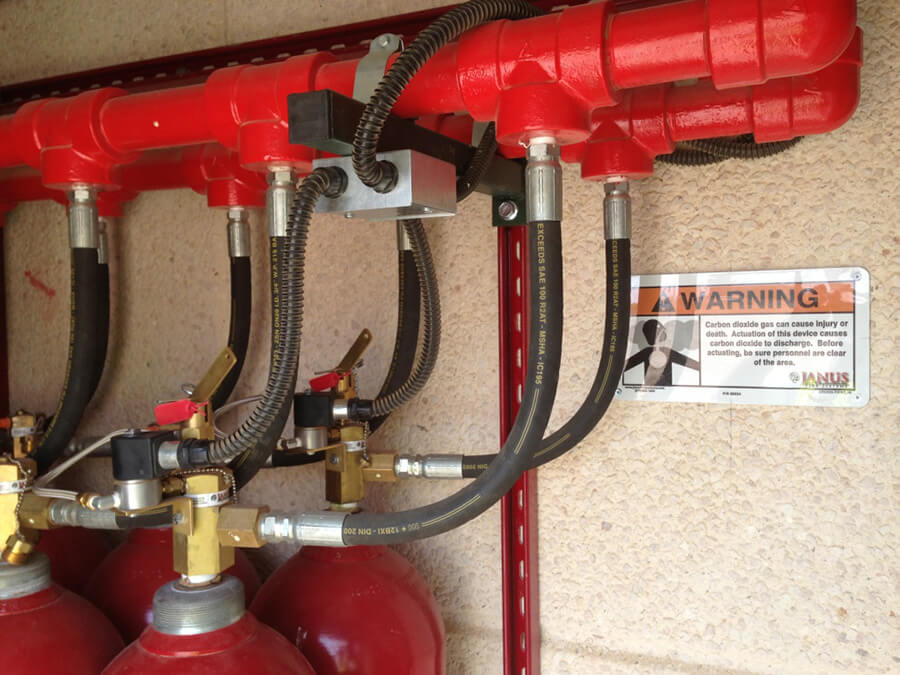 This shows the primary and secondary solenoid valve connected to the first cylinders in a row. It is a Standard requirement that two solenoid valves be used when a system is comprised of more than three cylinders. 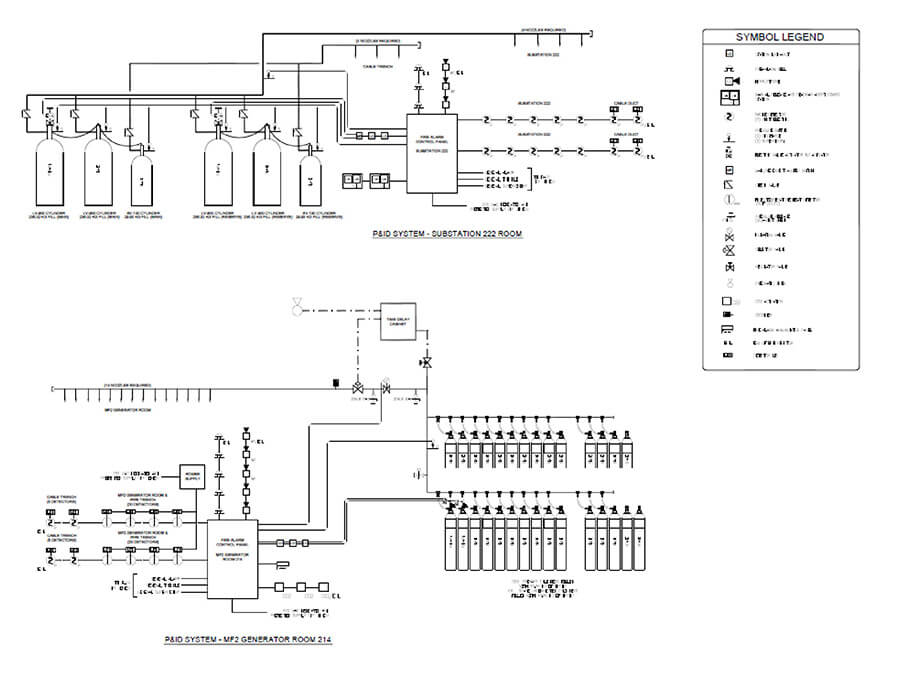 This is one of a set of drawings associated with this CO2 fire suppression system design. 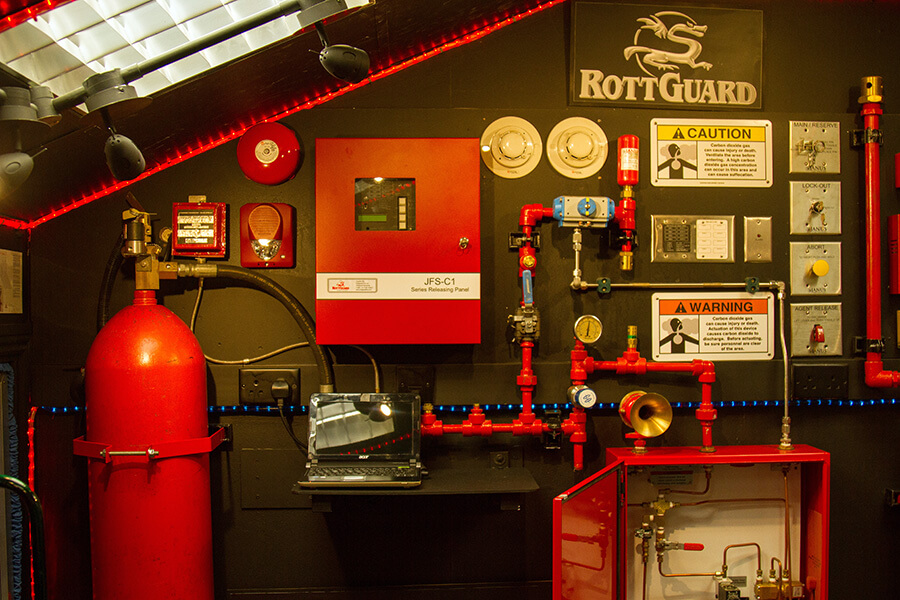 This is a representation of the CO2 system in the Almarai generator room. It is used for training purposes and includes, the manual release, lock out, abort and change over switches. It shows one CO2 cylinder, the electronic control panel and repeater, the first and second stage bell and sounder strobe and smoke detectors.

It includes the schedule 80 pipe with 3000 lb fittings, forming the discharge manifold with its various safety valves. It includes the pilot control panel referred to above, with the regulating valve, pneumatic horn and discharge valve; the odorizer; along with the caution and warning signs.